When and End to Hate Isn't an End: Boy Scouts

This Monday the Boy Scouts of America released a press statement that fired up the Internet. One would have thought gay men everywhere where pouring into streets to celebrate the end of homonegativity--or perhaps climbing up to the mountain tops to shout "Free at last, free at last. Thank God Almighty, we are free at last."

I'm keeping my hiking boots off. I don't see any need to rush to a mountain top just yet.

Let's look at what the Scouts actually had to say for themselves. As with most things, the devil is in the details. Read closely. 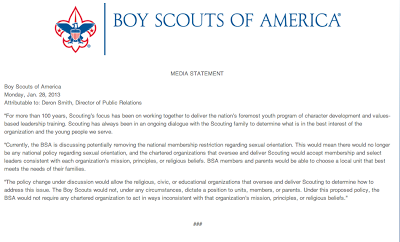 "Currently, the BSA is discussing potentially removing the national membership restriction regarding sexual orientation. This would mean there would no longer be any national policy regarding sexual orientation, and chartered organizations that oversee and deliver Scouting would accept membership and select leaders consistent with each organization's mission, principles, or religious beliefs. BSA members and parents would be able to choose a local unit that best meets the needs of their families."

The fine print also means that troops that are in areas that don't support gay youth will continue to be unsupportive of gay youth. In fact, 70% of Scout troops are chartered by religious organizations. Who honestly thinks that those religious groups that busy themselves with pray-away-the-gay charlatan therapy will suddenly start accepting gay youth into the scouts?

Come on. Raise your hand if you think this will happen.

I didn't think so.

Read more »
Posted by Unknown at Thursday, January 31, 2013 5 comments: Links to this post

This Little Piggy Went to the Market 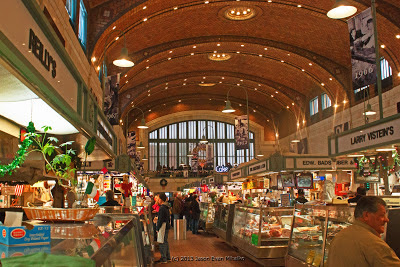 Started as an open air marketplace in 1840, Cleveland's West Side Market houses over 100 vendors representing a panoply of ethnic foods. The yellow brick markethouse, shown here on the left, was designed by Benjamin Hubble and W. Dominick Benes, was built in 1912.

Growing up in Cleveland, the market was a place that we would occasionally venture to as a family and later, when I was a young adult, the place that I went for my weekly groceries. When I was in town over the holidays I stopped in at the market for New Year's Eve dinner. 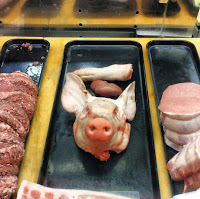 Of course, there are some things that I'm just simply not going to eat. Take the pig head, for example. That was one particularly delicacy that I wasn't going to have wrapped to go. I couldn't help but to take a picture of him. Despite the somewhat grotesque nature of the image, it brings a smile to my face. As a young child (and teen, and young adult) my mother would frequently chase me around the grocery store with all manner of animal parts. Not paying attention? A pig foot would scratch my the back of my neck. In a good mood? Perhaps a floppy cow tongue might start telling jokes. 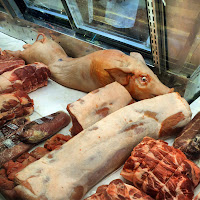 The least I could do is take a picture of porky the pig and smile a bit remembering my mom's antics in the grocery store. Clearly, this little piggy that went to the market is not going to be going wee wee wee all the way home.

Rumor has it that the animals are butchered right under the market. My high school horn teacher, Sandy Baxter, had a variety of interesting jobs that helped supplement her musical career. She once worked in the basement of the market butchering pigs.

Thankfully she never chased me around with pig parts when I played wrong notes. Here are a few more pictures I took at the Westside Market when I was their this New Year's Eve. After the page break you'll find some links to newspaper articles that collect shopper's memories as well as a couple of YouTube clips. 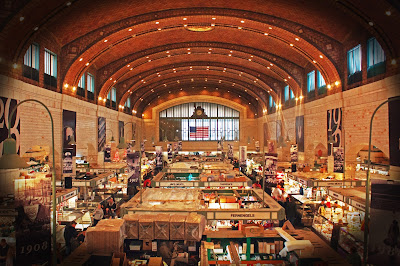 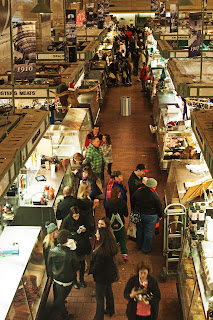 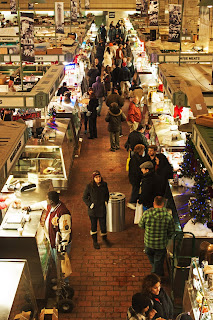 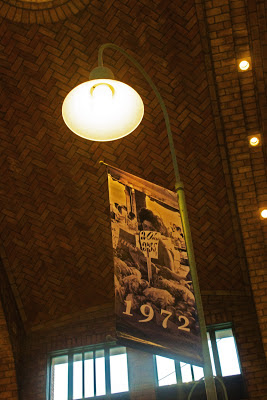 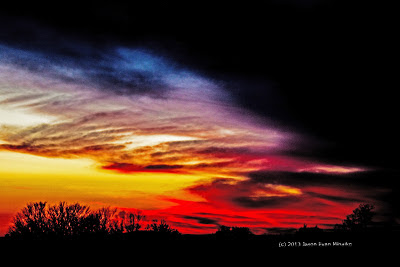 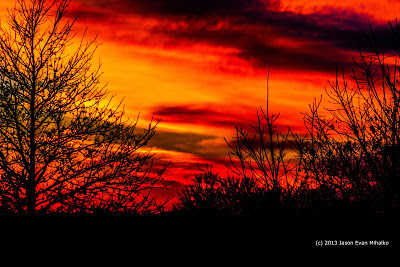 Posted by Unknown at Saturday, January 19, 2013 No comments: Links to this post

Email ThisBlogThis!Share to TwitterShare to FacebookShare to Pinterest
Labels: Photos 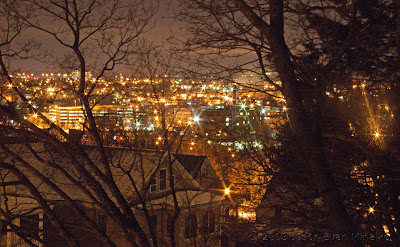 Posted by Unknown at Saturday, January 19, 2013 2 comments: Links to this post

Email ThisBlogThis!Share to TwitterShare to FacebookShare to Pinterest
Labels: Photos

These two pups, spotted on Twitter by Steve Silberman, serve as a good reminder that patience and demonstration are both important skills required by teachers and therapists of all sorts. In a rush to get patients to follow a protocol and get better fast, we forget change takes time. We also forget that we show people how to be well by being well ourselves.

Let's hope these two inspire you to have some patience and courage today.

Posted by Unknown at Wednesday, January 16, 2013 2 comments: Links to this post

The last couple of days I've had sex on my mind. I might as well talk about it here.  This all started a few days ago when I came across this tweet from the comic Paula Bel.

It's likely safe to assume that Bel's intention was comedy as she is, after all, a comic. However I read the tweet as yet another nod to the pervasive stereotype that teen boys are out-of-control sex crazed monsters and girls are tender vestal virgins who need to carefully guard their untouched wholesomness. We have so many ways to tell girls they should "keep their legs closed" because boys are apparently incapable (or not required) to keep their pants up.

Our children are developing their sexual bodies and emotions at earlier and earlier ages. There is no research to suggest that children are also developing critical, moral, or emotional thinking earlier--skills that equip young people with the ability to navigate the feelings developing in their young bodies.

The best we offer, it seems, is to suggest that girls keep their legs closed and boys explore their sexual feelings behind a closed bathroom door. That can't possibly work out well.

We ignore our children. We don't offer our children help and guidance in caring for, celebrating, and enjoying their developing sexuality.

We tell girls not to be sexual. We ignore them (while simultaneously dressing them up like sex objects). Girls are left to figure out their sexuality on their own. We give them no skills to learn about their bodies and responses. We don't teach them about empowerment or equip them with negotiation skills to say yes or no. We don't teach them that they are in control of their own bodies and their own pleasure.

We ignore our boys sexuality--or send it underground. Boys expected to be boys, and we tolerate their exploration of sexuality behind the closed door of a bedroom or bathroom. We leave them to themselves to figure out what to do with their feelings and bodies. We give them no skills at how to negotiate desire and closeness within the context of relationships.

Nope. This doesn't have a chance of working out. Not a chance. Not a damn chance.

These two have had their make-out sessions and some time to be stupid before we figured out they were up to no good. Their hormones are going bonkers and my son is thinking with the wrong head.

What a missed teaching moment for this teen boy and his partner. There is nothing wrong with make-out sessions. What a great way for two young people, equipped with communication and negotiation skills, to consensually explore closeness, sensuality, and feeling good. What a wonderful opportunity to discuss the merits of waiting to have sexual intercourse, and the variety of ways to people can share closeness.

Why shut down the conversation, and the experience, and deny teens the experience of their bodies and the closeness and attachment they want with another person?

What a sad and painful way to think about a teen aged boy. His nastiness can easily be something beautiful and sublime. Rather than to teach him that sexuality and sensuality is something that is forbidden and nasty (outside of marriage, of course), why not give him a variety of skills to be close and sensual with someone he loves and cares for? Why not teach him about handholding, and kissing, and touching, and tenderness, and saying yes, and saying no?

Why not teach girls the very same thing?

Everyone else has their sexuality and sensuality repressed or otherwise ignored.

When we live in the world like this, how to we expect our world to be different than it is?

....and let's not forget about the plight of teens who have same sex attractions. They are perhaps the most invisible of all.

In this video we have a frank discussion of changes that take place in boys during puberty. Sex is also talked about as something that is pleasurable. A shame sex education has not continued to develop from this 1957 film so teen boys and girls can understand their bodies and the possibilities (and complications) of sharing closeness and pleasure with another person.

Unlike the previous video, Molly grows up doesn't address that sex and sexuality can involve pleasure.

Sexuality intercourse outside of marriage is irresponsible and possible disastrous. Also, watch out for that animal appetite.

Talking about sex can be a bugaboo....

Posted by Unknown at Friday, January 11, 2013 No comments: Links to this post