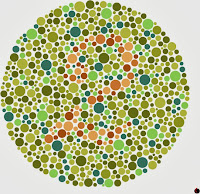 In a recent post on Psychology Today, psychologist/blogger Todd Kashdan wrote a post entitled "Sometimes Race and Sex Don't Matter: An Attempt to Stop the Madness with Political Correctness Run Amok." He starts with a story about his six year old twin girls:

Its beautiful to observe how at 6-years of age, my twin girls do not describe friends, teachers, neighbors, or strangers by race. This is rather typical:

"Dad, you know who I'm talking about, the guy with the nose that kind of bends around, with the puffy cheeks. Why are you looking at me like that, you know him, I've seen you talk to him."

"Why does that guy with the round head and bunched up legs walk his dog in the rain?"

"My best friend at school right now is Tamina. She wears glasses, her hair is long and crunchy, and she talks really fast."

These interactions require my full mental capacity because unfortunately, I have no idea who the hell they are talking about. In my career as a psychologist, race becomes a paramount descriptor. And while there are many reasons to do this, I want to suggest that this has gotten out of control, causing more harm than good

The blogger appears to be promulgating a color-blind perspective that involves seeing a person as a whole rather than a person with a complexion of a particular skin tone. In the above quote, the blogger/psychologist  describes his children as not seeing people by their race because they make observations about stereotypical phenotype differences in people they encounter (texture of hair, shape of nose, etc.) rather than making a specific mention of their complexion.

Hidden within his proud fatherly talk about his children, Kashdan obscures a significant body of literature within the field of psychology about the color-blind approach to race and human differences. Here are a few highlights of the thousands of peer reviewed articles written about problems of being color-blind:

The research doesn't make color-blindness appear to be a very effective method to understand, discuss, or reduce bias. In fact, research has demonstrated that a color blind approach to approaching racism encourages an individual to suppress their racism and experience their negative feelings toward Black people for a longer period of time. A multi-cultural approach that encourages awareness of differences, on the other hand, helps individuals express and resolve bias toward Black people sooner (Correll, Park, & Smith, 2008).

Kasdan also is either unaware or intentionally obscuring a significant body of peer reviewed literature that documents that children are aware of and make decisions based on racial awareness from an early age. Children aren't any more color blind than adults.
So much for the idyllic image of children encountering the world unburdened by judgements and preferences that are based on race. Children notice race and are actively making decisions based on race.

Kashdan goes on to provide two exhibits purported to support his color blind view of psychology. He questions why one would "expect someone's race to alter how they respond to questions about anxiety" specifically and opines that "arbitrarily assuming that someone's race should define them, that they should be labled, boxed, and shipped in a different container than other human beings because of the pigmentation of their skin and assumed cultural belief system is akin to racism."


Its not that racism doesn't exist, it does... but sometimes [race] just doesn't matter.

This sounds so nice. Judging people by the content of their character and not by the color of their skin. We've all heard that of course, because Dr. Martin Luther King Jr. stood up one day, looked long into the future, and showed us a path to a place we all might someday hope to be.

The problem is this: we aren't there yet. In his blog post, Kashdan cherry picks (called confirmation bias)  a couple of studies that don't demonstrate differences based on the race of an individual. He ignores an overwhelming body of peer reviewed literature that documents the pervasive effect of pervasive racism.
So when doesn't race matter? There are times. In his blog post Kashdan cherry picks two examples. I'm sure their are others. However, the overwhelming evidence demonstrates that race matters. Additionally, the overwhelming evidence demonstrates that by not incorporating an awareness of the potential differences caused by race can cause white psychologists to inflict further discrimination-based violence on an individual person of color.

I'm not saying anything new here, of course. The American Psychological Association has published Guidelines for Providers of Psychological Services to Ethnic, Linguistic, and Culturally Diverse Populations. The guidelines outline the importance of having a "framework to consider diversity of values, interactional styles, and cultural expectations in a systematic fashion" including:
The American Psychological Association has also published Guidelines on Multicultural Education, Training, Research, Practice, and Organizational Change for Psychologists. They are worth publishing here because this document creates what is considered standard ethical practice for psychologists.

So after I read this blog post I decided to engage with Kashdan on twitter for a little bit. It didn't go so well. The point I wanted to make is that it's important to do the research, to ask the question: does race have an impact on a particular aspect of human experience? So much of the research in psychology is based on a sample of white, middle class, heterosexual college students. With samples like that, we cannot say any particular research is applicable to a different population. So despite Kashdan's scorn, it's important to see if Black people have a different response to a particular stimulus. Otherwise we only really know what responses white middle college students have. There may be a difference, there may not be. Kashdan writes:

What theoretical reason would lead you to believe that a black 21-year old enrolled at a university thinks differently about what it means to be overly upset about anxiety than a hispanic 21-year old at the same university?

I thought Kashdan was suggesting in his original blog post that it was important to ask the questions like this, research them, and see the evidence of whether or not there are differences.

In asking what my threshold is at accepting a null hypothesis about race, that race has no relationship to a particular variable, Kashdan changed what we were talking about. I thought we were talking about the importance of asking questions about whether or not race matters by looking at evidence and making decisions based on that evidence.

One would need to see if a person of a particular race had a different response to a fear about spiders to know if there is a difference based on race. That's how science works. It's a rather small research question, but a research question nonetheless.

In his blog post, Kashdan offers two examples where race appears to have no relationship to the variable being discussed. He tries to move the conversation here to say that there is a null hypothesis that needs to be accepted -- that race, in general, has no relationship to..well..I don't know what he's talking about.

Kashdan's response was to cast aspersions on me, to argue that I've mischaracterized him, and in numerous ways, change the subject to me rather that the issues of exploring the impact of race in understanding human behavior. Here's a few highlights:

On suggesting that Kashdan is looking at research that confirms his view and rejecting the enormous body of literature that demonstrates race matters:

In response to making reference to published guidelines and standard practice expected of psychologists working with issues of diversity:

More aspresions cast rather than focusing on the point I made: it is important to research whether or not race has an impact on a particular factor:

Kasdan called other therapists who talked about the importance of race "mindless."

And then some other psychologists joined in casing aspersions rather than focusing in on the actual topic being discussed. For example, I'm a troll:

Kashdan continues this morning promulgating his view that he's somehow able to do what not even a three month old infant can do: make observations that are not influenced by race. While the rest of us are all just a little bit racist, Kashdan can apparently refrain:

He also is apparently still feeling unfairly attacked by the "mindless" and "lazy" political correctness police.

Now Kashdan says in this last post that race is important, sometimes. That's nice. Yet somehow I am called lazy, mindless, and a troll for saying it's important to do the research research to prove or disprove that race matters on any particular variables of interest.

It's also curious how Kashdan is somehow magically able to refrain from discrimination when thousands of studies with tens of thousands of diverse participants have demonstrated that we discriminate in explicit and implicit ways. Did he receive some sort of special robe with his doctorate that wasn't included in my program?

Take some tests and explore your own implicit and explicit biases.

Of particular interest are:

Rather than talking about what I said, Kashdan and others busied themselves calling me mindless, lazy, or threatening.

Kashdan also took the time to try to make a handsome little straw man out of me by characterizing me as having said something that I never said.


These interactions require my full mental capacity because unfortunately, I have no idea who the hell they are talking about.

We're even, because I have no idea what the hell is is talking about.

There is an extensive body of peer reviewed literature demonstrating that we aren't color blind, that coming from a color blind standpoint is dangerous, and that race has an enormous impact on human behavior and mental health. The American Psychological Association makes it clear that these issues matter and should be in the front of an ethical and competent psychologist's mind when working with clients.

Kashdan didn't want to talk about any of this. He wanted to focus on his two examples in his blog post and his anecdote about his children. He attacked anyone who called out a view different than his own.

I've not talked about sex, gender, class, religion, ethnicity, sexual orientation, or any other factor in this post. They are important too. Perhaps a post for another day, or a body of knowledge for you to investigate on your own.

This issues of difference matter. I think about them every day. Sometimes I get it right. Often times I get it wrong. As my friend Martha Crawford noted in her post Queries Concerning Psychotherapy and Privilege:

Keep asking the questions, young (and old) therapists. It matters.