We don't like to admit that things that are broken cannot always be repaired. We develop empirically supported interventions that demonstrate our facility for erasing symptoms of mental illness and curing the ills of the psyche. Chemists and biologists develop powerful substances that right the wrongs of the miniature chemical metaphors for mental illness inside the synaptic cleft.

We wrap ourselves in god-like metaphors of power, control, and authority. We heal the wounded. We restore the broken to a state of wellness. We right that which was wronged.

We try to place all of the evils, pains, and terrors of our world back into Pandora's box with the hope of this cure called psychotherapy. Our way out of mental illness, a hope for a different future, has become interwoven with these notions of restoration and repair. Returning things to the way they were.

I've grown convinced this is not always possible. Even if it was, I'm not sure it is advisable.

I don't think that's advisable at all.

On any given day any number of survivor stories pass by my eyes on the internet about those who have experienced sexual abuse. As our seemingly endless "war on terrorism" slogs on, I see an increasing number of wounded soldiers displayed for pubic consumption. Stories like these make me angry and sad, hopeless and hopeful. Thousands of tales of lives broken by sexual and physical trauma. Thousands of tales of lives restored through the power of hope, courage, caring, and empowerment.

As someone recently mentioned to me, some do come out of a traumatic experience stronger. Some find a certain kind of beauty in the growth that occurs after a trauma. Some isn't all. In fact, some is a far way away from all.

Every 65 minutes a veteran of the US Military commits suicide.

Adults who have experiences sexual abuse are twice as likely to have a suicide attempt.

What happens when that which was broken cannot be restored? Who speaks for those who are broken and either cannot or will not be repaired?

A huge industry of self-help groups have grown up around the books A Courage to Heal and Victims No Longer. While both books, in many ways, put childhood sexual abuse on the map, they both also perpetuate a disturbing trend toward a wish to repair that which remains unrepairable. An industry has grown up around us depicting survivors of sexual and physical traumas as strong, proud, and invincible warriors. I wince every time I see this meme replicated. I realize saying this may make me somewhat unpopular in some circles of the sexual abuse healing industrial complex.

I think we've lost our way, young therapist. In following our culturally prescribed roles to be powerful healers we've forgotten that not everything we touch can be restored. Sometimes, no matter how hard we try, we cannot put Humpty Dumpty back together again. 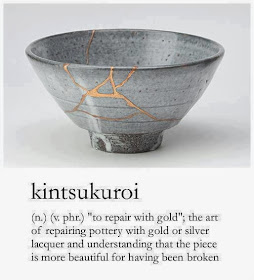 I'm not even sure it is important that we even try.

It is not that I am against strong, proud, and invincible warriors. I think those who find their journey takes them to these places are mighty fine. They've found their voices and found ways to make their lives a life worth living.

What about the ones who find that no measure of gold or silver can hold the pieces together again in a fashion more beautiful than that which existed before? What of those who tried kintsukuroi and found they have nothing but a pile of pretty broken pieces?  What of those who, like Humpty Dumpty, have fallen and learned that all the kings horses and all the kings men cannot put them back together again?

Who speaks for them?

“If people bring so much courage to this world the world has to kill them to break them, so of course it kills them. The world breaks every one and afterward many are strong at the broken places. But those that will not break it kills. It kills the very good and the very gentle and the very brave impartially. If you are none of these you can be sure it will kill you too but there will be no special hurry.” -- Ernest Hemingway

Somewhere along the way, young therapist, we've forgotten that our most powerful tools are not those which fix broken things. Our most powerful skill is our presence and our attention.

Don't get lost in the illusion that therapy is about fixing the broken parts of people. It's nice when we can fix things. Don't get me wrong. It's just that fixing isn't our most important task. Somewhere in our training and acculturation as a therapist we learn to stop listening and get lost in our own theories of how to fix things. We move from being having a role of a midwife of dialogue to the role of a high-tech mechanic.

The map is not the territory. -- Alfred Korzybski

The description is not the described. -- Jiddu Krishnamurti

The map is not the thing mapped -- Eric Temple Bell

Sometimes we therapists have a very helpful map to offer. Other times our maps are a hinderance and obscure the road ahead for our patients. In the end, the best maps are those which our patients create. The ones we have to offer are just temporary aids.

Therapy is about helping people see the broken parts of themselves. Therapy is about being witness to that which was broken. Therapy is about co-creating a space where our clients have a place to feel fully broken, to feel helplessness and despair, and for clients to discover in their own ways the contours of the territory ahead.

Don't forget to listen, young therapist. Create the space for people to be broken. Allow your patients the dignity of the agency to decide what lay ahead.

Do not accept any of my words on faith,
Believing them just because I said them.
Be like an analyst buying gold, who cuts, burns,
And critically examines his product for authenticity.
Only accept what passes the test
By proving useful and beneficial in your life.
--The Buddha

Or as my mentor Joseph Shay used to say, "I'm just one guy talking."